The Chennakesava temple situated in Belur in Chikmagalur, Karnataka is home to the Hoysala temples from the 11th and 13th century. This temple was built by the Hoysalas during their 300 years rule in Karnataka and took over 102 years to get completed.
When you step inside the temple, you meet beautifully carved sculptures and monuments which show the best of Hoysala temple architecture. The name of the temple is derived from Chenna, which means beautiful and Kesava, which means Vishnu.

Victory over Cholas of Tamil Nadu
Historians say that this temple was built by King Vishnuvardhana and completed by his grandson after 102 years because of its massive structures and intricate architecture. This masterpiece was built to celebrate King Vishnuvardhana’s win over the Chola dynasty of Tamil Nadu in the battle of Talakad. The Hoysalas annexed Gangavadi from the Cholas in this battle.

The temple was anciently named, Vijayanarayana and later given the name Chennakesava because of its beauty. It is situated on the banks of the Yagachi river in Belur.

Temple architecture
The main entrance of the temple consists of a Rajagopura which was built during the Hoysala Empire. Uniquely, all the temples of the Hoysala Empire have their Gods and Goddesses figurines facing east. Similarly, the Chennakesava God’s shrine also faces east of the temple. The shrine or the main temple is covered by two temples, one at the right named Kappe Channigraya temple and a small temple behind the Chennakesava temple called the Sowmyanaki temple. On the left of the shrine is the Ranganayaki temple. There are also two main pillars or sthambas named Garuda and Deepa sthambas which are situated at the left and right of the main temple respectively.

Gravity Pillar
Right at the centre of the temple stands a tall pillar which is carved from a single piece of rock and stands on its own. It is thus, called the gravity pillar.

Temple Doors
The beautiful temple has three entrances and all the three entrances have magnificent lady dwarpals carved on the walls that are exquisitely dressed with ornaments. As the Hoysala architecture has another history of its founder, there are structures of little boy Sala killing a beast. The story goes, one day; young boy Sala along with his master was visiting a temple in Angadi where a menacing beast approached them. The master in all anxiousness threw at him an iron rod and shouted “Poy sala” which means “strike Sala”. The brave boy killed the beast with the same iron rod. All the Hoysala regime temples have this figure built around them. This figure became a trademark for the Hoysala dynasty which existed from the 10th to 14th century AD and Sala became the king.

A total of 100 temples were built in this period and there are only three temples which are popular today namely the Kesava temple at Somnathapura (Lord Vishnu), Chennakesava at Belur and Hoysaleswara at Halebidu.

The outer wall:
The intricate carvings throughout the outer wall leaves the visitors spellbound. Virtually every inch of the shrine is intricately carved and each carving is a masterpiece of craftsmanship.

Lower Frieze :
The horizontal row of friezes depict carvings of elephants, lions, scrolls of small female figures adorned with ornaments intersected by larger vertical images. An interesting point to note her is no two friezes in the complete range are alike. As you move your eyes higher up on the walls, the carvings gets more dense and intricate. The wall also features several screens with holes for ventilation purpose and bear carvings of the court scenes of King Vishnuvardhana and Veer Bhalla II.

Madanikas:
There are a total of 40 pillars on the outer walls, each with a bracket figure of dancing girls also called Madanikas. Out of total 42 bracket figures on the corners,  38 freestanding bracket figures are outside the temple angled between the upper walls and the over-hanging eaves and the remaining 4 are inside the temple.
The madanikas are beautiful damsels in various moods representing feminine charm and grace. Each figure represents the grace of an ideal female form is capable of . These sculptures are finely proportioned and exceedingly ornamented.

Besides the madanikas, beautiful mythological depictions can also be seen on the outer wall.
There are also wall carvings of deities like Durga killing Mahisasur, Lord Surya on his Rath, Varaha, Brahma , Ganesha and other deities.There are dancing figurines of idols with bangles on their arms which are spectacular.
The main diety, Lord Vishnu has four hands and is flaunted by two lady deities on either side. The puja that goes on inside the temple once in the morning and evening is performed for 887 years.

The polished pillars and ceiling inside the The large navrang mandapam is one of its kind. The pillars differ in sizes and design patterns except for the 4 pillars at the centre crowned by bracket figures. One of the prominent ones is Queen Shantala Devi’s figure in dancing posture with a gem on her forehead.

The second one is Shilabalika with her pet parrot. The bangle on her right hand and can move up and down.
The third one is Gandharva  Shilabalika wearing a number of bangles in her forearm
and the fourth one is Kesha Shrungara Shilabalika wringing her hair to squeeze the water after her bath.

The hall is separated from the entryway to the idol by an intricately carved gateway depicting detailed ornamental carvings of the 24 forms of lord vishnu and 2 dwarpals on either sides of the entrance. The beautifully ornamented 6 ft high idol of lord Vishnu has 4 hands, the upper 2 holding a discus and conch, while the lower 2 has a lotus and a mace. Idols of his consorts, Bhudevi and Sridevi can be seen on either sides.

Chennakeshva temple is the only functional Hoysala temple with pujas being performed both in the morning and evening. This tradition is being practiced for the last 887 years.

Besides the main shrine, there are other smaller shrines namely the Kappe Chanigaraya Temple, The Veernarayan temple, Saumyanayaki Temple and Andal Ammanavara Temple.

Regarded as one of the jewels of South Indian architecture. the temples have become rich repositories of ancient Hindu culture.
The sheer beauty of form, delicacy of workmanship and perfection of finish makes the Chennakeshva temple a must visit site on every tourist’s temple itinerary. 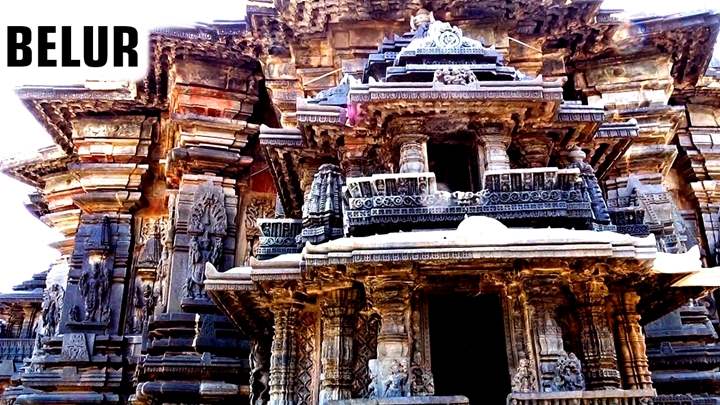 How To Reach:
By road- Belur is connected by buses to main cities like Mysore and Bangalore. It is well connected to tourist places like Hassan, Shrananabelagola and Madikeri.
By railway- The nearest railway station is Hassan with trains from Bangalore, Mangalore and Mysore.
By Air- The nearest airport is Mangalore.

Note: These temple complexes have been proposed to be listed under Unesco World heritage sites.