Literally meaning “Lake of the Great Hollow”, the Pangong lake lies 160 Km southeast of the capital town ofLehand is certainly one of the most mesmerizing sights of Ladakh. Technically speaking it is the largest endoheric lake inAsiaand lies at an altitude of 13,900 feet above the sea level. Though salty the water of this lake is crystal clear displaying a breathtaking shade of azure blue. The sheer size of this beautiful lake leaves one in astonishment as you approach it the first time.  The lake is 5 Km wide at it broadest point and is more than 135 Km long covering a massive area of more than 604 Square Kilometers. 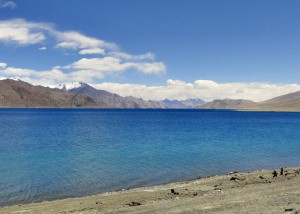 PangongLakeis about 5 hours drive from Leh through breathtaking and scenic valleys of Thiksey and Chemrey. The drive may not be comfortable as the condition of the roads need serious repairs every year after the snow melts, but the serene views of the valley prevents any fatigue from setting in. One has to cross the Chang la Pass followed by the ‘Pagal naala’ enroute toPangongLake. There are few tea stalls at the pass that provide hot cup of tea at those freezing altitudes. There are stray horses and the Pashmina sheep of the locals grazing peacefully on both sides of the meandering road as one approaches the lake.

The wonderful effect that mesmerizes visitors is primarily created by the huge barren mountain ranges that flank the lake with their over powering shadows making stunning reflections of the pristine blue waters of the lake. It is as if the lake holds augment to the skies as the majestic mountains look on. The blue waters of the lake change shades with the sun’s movement giving a mystic feel to the entire locale. Small migratory birds that visit the lake in summers add to the wonder as they swing calmly to the small ripples on the lake water. The brown headed gulls and the majestic black-necked crane are among the most often sighted avian visitors to the lake.

The serene blue waters extend well beyond Indian borders intoTibet. In fact only one fourth of the lake is inIndiawith the rest under the control of Chinese authorities. The Man and Merak village accommodating Tibetian Gypsies lie nearby and are livable only in the summers. The Spangmik is the farthest habitable area till where the visitors are permitted. The Indian army has many bases beyond that village which saw some fierce fighting during the Indo China war of 1962. There are few war memorials there which can be accessed only after specific clearance from Army authorities.

The waters of theLakefreeze during winters providing a perfect hard walking surface for yaks, ponies and sheep to move in their migratory path. Recently the panging lake came into lime light in the Bollywood hit movie 3 Idiots whose final scenes were shot on the banks of the lake. The passes required to visit the lake are easily obtainable at Leh through any travel agent.

The rarified atmosphere, majestic mountains, clear skies and pristine blue waters of the lake combine to create a magical effect that lingers in the memory long after you have left the place.