You are here: Home / Landscapes / Monasteries of Ladakh

The magnificent monasteries of Ladakh are most attractive of tourist attractions for people from all over India and abroad. These monasteries are peace abodes of the monks of various orders of Buddhism providing the ideal getaway for pursuit of spiritualism and study of religion. Amazingly built on steep mountain slopes the monasteries are indeed architectural marvels and stores houses of rare Buddhist relics like thankas, murals, sculptures, scriptures, etc. The tranquility that is experienced in these monasteries is unmatched and indescribable. The locals call these monasteries as Gompa s which was built over centuries by various rulers and religious leaders of the region. 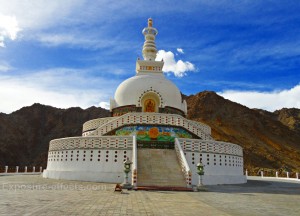 Diskit & Hunder Gompa: Built in the 14nth century both these Gompas belong to Tsongkhapa Order of Buddhism. The Gompas are located high on the slopes lending a majestic feel to the entire Nubra valley. Legend has it that the Diskit Gompa was originally inhabited by a demon who had sworn to eliminate all traces of Buddhism from the region. After long struggles a few Buddhist monks were able to annihilate the demon in front of the Gompa. The spirit of the demon is believed to be roaming till date around the Gompa and has been spotted by many on various occasions in the form of a wrinkled head. Hemis Gompa: Founded in 1630 this monastery lies about 47 Km east of Leh and belongs to Dugpa Order of Buddhism. Apart from the magnificent gold and silver stupas of the Gompa, the copper-gilt statue of the Lord Buddha forms the main attraction of this monastery. A sacred mask dance that is performed annually at the Gompa is a major tourist attraction. Monks can be seen practicing the dance daily without the ornate masks. Shey Gompa: Located just 15 Km south of the Leh town this Gompa was founded in the 17th century by King Deldon Namgyal in the memory of his late father, Singay Namgyal. On the sidewalls of the Gompa beside the statue of Buddha are displayed 16 Arhats (Worthy Ones who have achieved Nirvana), eight being on each side. A large bowl of wax with a central flame, symbolizing divinity and purity, is placed in front of the Buddha statue. Lamayaru Gompa: Located about 130 Km west of Leh this Gompa lies in what is popularly known as the ‘Moonland’. The Gompa was founded in the 11nth century belonging to the Red-Hat Sect of Buddhism. The Gompa is a prominent learning center of Buddhism and houses about 150 trainee monks undergoing the rigors of spiritual discipline. As per legend the entire area surrounding the Gompa was originally a lake during the time of Sakyamuni (the Historical Buddha) in which holy serpents resided and that in the future the there will earthquakes which will bring back the holy lake to its place. Shanti Stupa: Located on the hill top of Changspa within the city limits of Leh this pagoda was established in 1985 as a symbol of ‘The Japanese for World Peace’ to commemorate 2500 years of Buddhism. This magnificent white-domed structure offers a mesmerizing view of the sunset on the Leh town. There are many other small and big monasteries in Ladakh worth paying a visit. These rich heritage sites have with them many ancient Buddhist scripts and sculptures.