Bikaner in Rajasthan – India, is famous for its imposing palaces, forts and temples. 30 Kms from Bikaner, in the town of Deshnok is one of the strangest and unusual temples in the world – The Karni Mata Temple. The impressive architecture and the spiritual significance of Karni Mata temple makes it one of the most sought after tourist attractions in Bikaner. 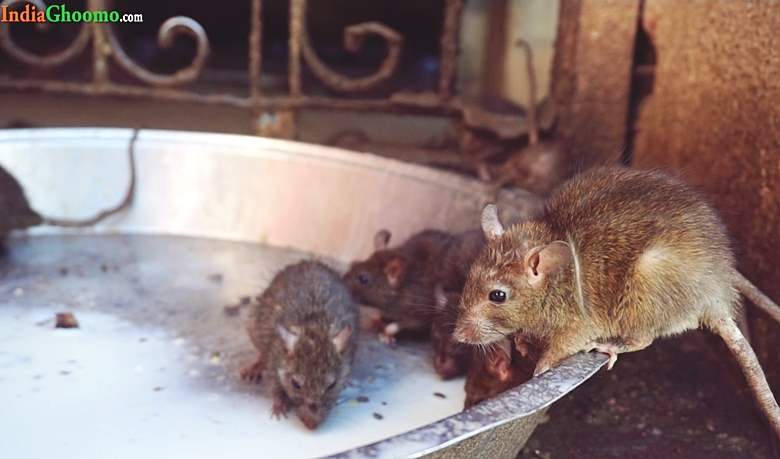 The current temple was built by Maharaja Ganga Singh of Bikaner about 100 years ago. It is made of marble and stone, with silver doors at the entrance. Everyday, thousands of tourists,  locals and pilgrims visit Karni Mata temple to seek blessings of the goddess and the rats that rule the temple – yes, you hear it right RATS.

The temple is home to over 20,000 rats also called “Kabas  or “little children,”. These rats are treated  sacred. Hence, are fed, protected and worshipped here.

Namastey from team India Ghoomo, It’s Sarita & Kamal and welcome to Rajasthan series. In this post/video, we will take you to Karni Mata Temple and explore the uniqueness of this beautiful mystical temple

The main deity in the temple is Goddess Karni Mata who is regarded as the incarnation of Maa Durga & The kabas are believed to be the manifestations of Karni Mata herself and her sons. 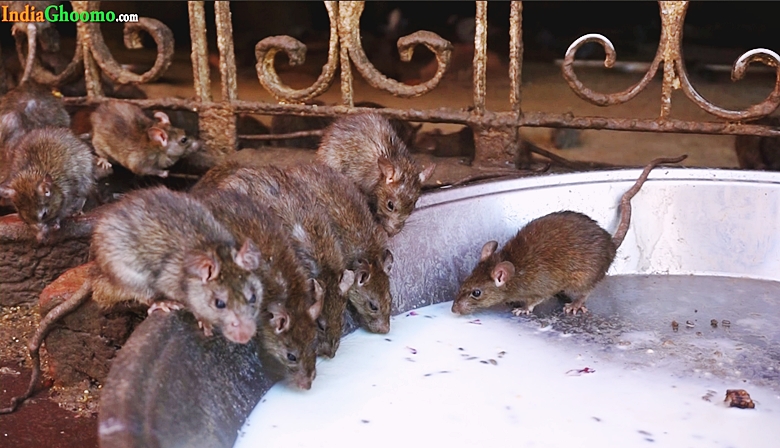 The Main Shrine at Karni Mata

The shrine has a beautiful 75 cms tall idol of Karni Mata holding a trident or trishul in her hand. She is adorned with a crown and a garland of flowers. It is popular belief that Goddess Durga in the form of Karni Mata lived at the place where the temple stands today and performed miracles during 14th century.

The moment you enter the temple courtyard you will see rats all over the place – popping out of holes in its marble walls, running around crossing the isle ,tumbling down the staircases and balancing on the frames of the cast-iron gates. You will also find a bunch of them lazing around. 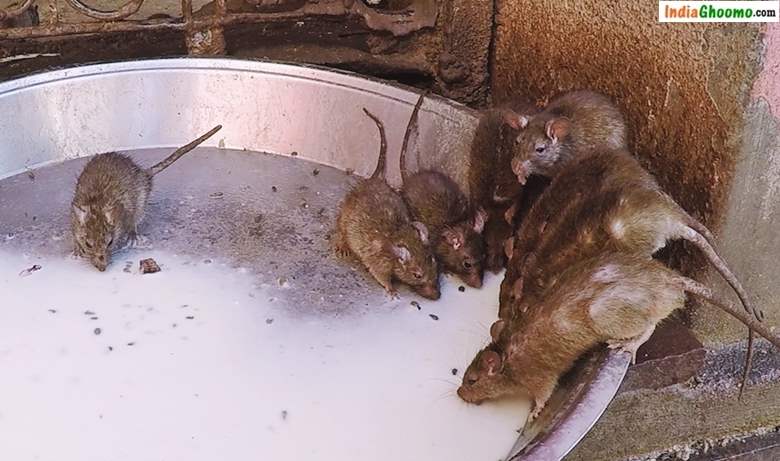 These rats are very friendly and do not bite the barefooted pilgrims who enter the temple. Rather, you will find them running around and playing with the visitors. And if a kaba happens to run across you feet, consider it auspicious.

You will find the rats either nibbling on sweets and prasad that has been offered to them or slurping milk and water from huge metal bowls kept on the ground. Rats can also be seen inside the main shrine feeding on the prasad and milk offered to Karni Mata, while the pujari performs puja rituals.

The temple rats are different from the ones found in houses. House rats are known of spreading diseases such as plague and often bite people. But the temple rats are totally harmless. There are no recorded cases of humans contracting a disease from the temple rats. The temple has never had an outbreak of plague, unlike other areas of India. The rats are also not known to ever bite or attack humans in any way and they never leave the temple even though they are free to do so.

Yet another strange and astonishing fact about the rats in this temple is that no one has ever seen newborn Kabas and most of them are of a typical size and look replicates of each other. No one exactly knows anything about their mysterious life cycle. However, there is a legend associated with their life cycle that we have mentioned in our blog post. Link is in the description box below.

Karni Mata Temple is the best place to visit if you want to observe fascinating religious customs and want to enjoy watching thousands of rats running around you and over your feet as you walk around in the temple and feel the presence of Karni Mata.

Things to Keep in Mind at Karni Mata Temple

– There is no entry fee

– Milk and prasad is easily available at various stalls just outside the temple. Carry some to offer to the deity and to feed the rats.

– Footwear is not allowed inside the temple. However, you are free to wear socks. On request, fabric shoe covers are available outside the temple. You can cover your feet with them before entering the temple.

– The rats are everywhere inside the temple. Hence, their chances of coming underfoot is very high. The temple rule says if anyone happens to crush a rat under his/her foot, they will have to offer a rat made of gold to the temple as punishment. Therefore, be extra careful.

– During Navratri the temple witnesses huge influx of locals to come to seek Karni Mata’s blessings. 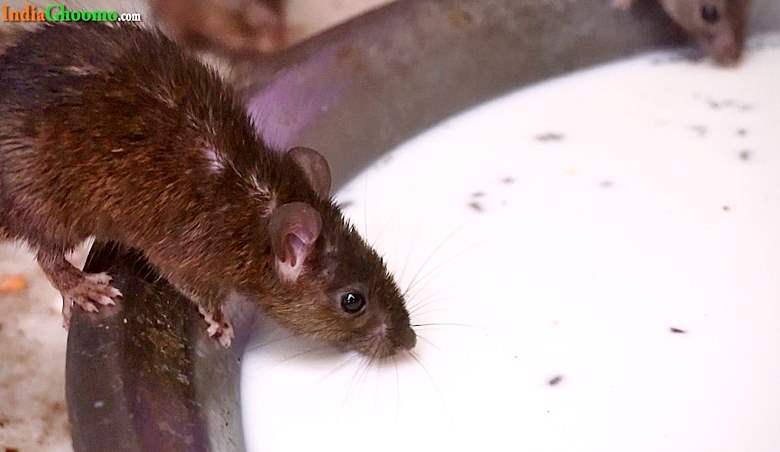 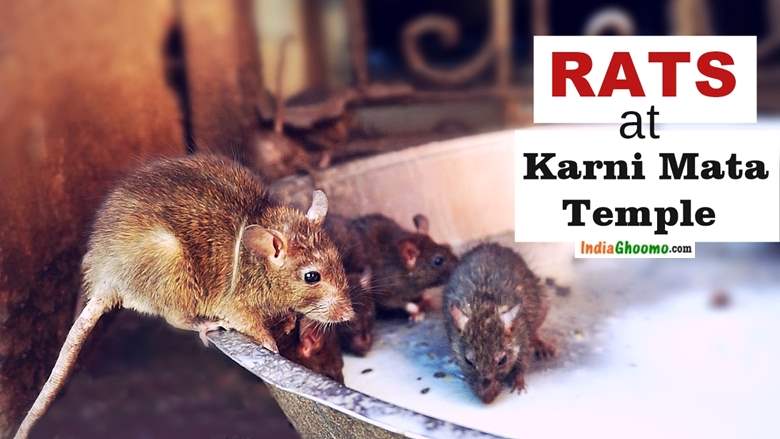