Located 150 Km north of Lah, the Nubra Valley derives its name form Ldumra (the valley of flowers). It is the confluence of Shyok and the Nubra River creating a wide valley that separates the main land Ladakh from the Karakoram ranges. The valley is full of surprises for the casual visitor who expects snow covered peaks, the valley being at 10000 feet above the mean sea level. Visitors require inner area permit from authorities at Leh to visit the valley due to its sensitive proximity to the Siachin Glacier. The permit can be obtained easily and one can hire a SUV class cab from Leh to reach Nubra. The drive though treacherous and scary at places is worth every bit of effort once you have the first glimpse of the valley. 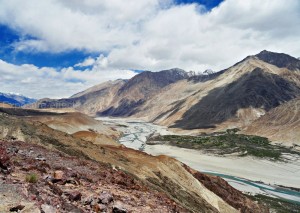 From Leh, Nubra takes 6 hours of driving with a couple of tea stopovers in between. One has to cross the Khardungla Pass enroute which is the highest motor able pass in the world. People who heart conditions would be better advised to avoid the trip as Khardungla is at 16300 feet 18380 feet above sea level with extreme shortage of oxygen. After crossing the pass you enter there’s a small place called North Pullu which call for a short tea break and hot noodles in those freezing environs. MUST WATCH NUBRA VALLEY VIDEO – The main place in the entire valley is the district headquarters called Diskit which has a famous 9th century Budhist Gompa. Long horned Ibex can be seen grazing fearlessly around the Gompa located on a steep hill side. There’s an imposing 35 metre statue of Maitreya Buddha facing down the Shyok River towards Pakistan. The statue can be seen from most places in the valley and is quite imposing in its presence. Next to Diskit is the place that amazes one and all – Hunder. This wide stretch in the valley is a desert complete with sand dunes and camels. The Bactrian double humped camels are found exclusively at this place in India. These camels are believed to have been brought here by the initial Mongol invaders who used this route to reach Indian mainland. In the afternoon gusty winds pick up sand to create miniature sand storms over Hunder. This is probably the only place in India where your camera can capture snow peaked mountains and sand dunes blowing off sand storms in one frame. One can hire a ride on the double humped camels for about Rs. 100 to Rs. 150 for an exciting experience. Panamik village is the largest human habitat in the valley and boasts of having a few hotels and a school that remains closed during the winter half of the year. People are extremely friendly and most can understand Hindi well. Interestingly enough one can see a couple of Cable TV antennas in the village. A walk around the country side is one of the most refreshing moments of this trip. An occasional Indian Air Force flies overhead carrying rations for the Indian troops located on the highest battle field on earth – Siachin Glacier which is not far away from Panamik. Smoking and alcohol are a strictly out of question in these areas as it may lead to serious complications. One may be tempted to try out the local brew called Chaang made of wheat and barley grown by locals during summer on the river bed. Returning from the Nubra Valley makes you feel coming back to the world from a visit to some outer planet.

Apart from the stunning beaches, vibrant nightlife and breathtaking landscapes, Thailand is also popular for it’s alluring tropical rainforests. There […]

Located on Thailand’s southern west coast, Krabi is home to more than a hundred offshore islands. One can visit the […]

Krabi is a popular and most preferred starting point for the various island hopping tours in Thailand. The alluring […]

With some of the worlds most alluring islands – Krabi, Thailand is famous for its island hopping tours. Out of […]